Yes, that’s right kiddies, Punk As Folk is back for a third year at a third venue. The first year was a four day event at our beloved Funhouse, which saw the last performance of God’sFavorite Beefcake and performances by some of the top names in punk-inspired folk music from around the world. Last year, we sold out The Comet (again, RIP. We know it’s back but, you know, not really) with blazing sets by Blackbird Raum, Sourmash Hug Band and others.

This year, we play a new venue, Conor Byrne’s in Ballard on Friday, May 23, with all the artists hailing from the Pacific Northwest: Strangely from Bellingham, The Mongrel Jews (back for their third year!) from Seattle, Future Fridays from Seattle,Lone Madrone from Portland, Danbert Nobacon from Twisp (by way of Leeds, England) and of course, South Seattle’s own Bad Things closing out the night.

I gotta say, I like the way each of these band’s incorporate punk influences into their acoustic-based music and I think this is going to be the most musically diverse lineup yet. For us, diversity was always what defined the early punk scene….not so much mohawks, leather jackets and fast songs. Just look at the difference between Crass and the Buzzcocks, or Suicide and The Cramps. But, then again, I guess this proves that we’re old and hail from a bygone era.

Capacity is much more limited this year and we are not selling advanced tickets so get there early. Music starts at 9pm. And, if you’re busking at Folklife that day and want to continue the party, come down and busk out front. Seems like that’s happened every year so far and we like this trend.

Then, on Memorial Day, Monday, May 26, we’ll be hitting the NW Folklife Festival once again. There’s talk of us doing some busking on Monday before our performance for old time’s sake, so look for us around Seattle Center. We’ll take the Vera Stage at 3pm. Come out and say hi and be sure to check out all our other friends that are playing the festival throughout the weekend, including Bad Things’ bass slapper Mad Wilcox’s other band Bakelite 78 (Saturday) and Bad Things’ banjo player’s indie/psych band Low Hums (Sunday).

As for the rest of the summer, we’ll be finishing up our new record in preparation for our CD release in September. More on that later. We’ll also be playing around town this summer: Columbia City Beatwalk and The Tractor Tavern (with Lynval Golding of The Specials and Martin Atkins of PiL, Ministry, Pigface fame!) in July and Big Al Brewing’s big anniversary party in August.

Come out and say hi next weekend at Folklife and stay tuned for our summer schedule as we finalize all the details. 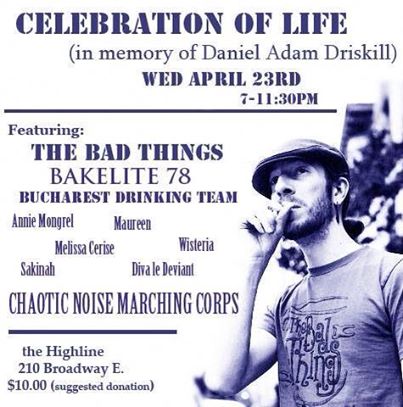 Seems like this band has played too many memorials in the last two years.

It was at the memorial for the Cafe Racer shootings at The Neptune Theater that Daniel Adam Driskill told me he’d been diagnosed with brain cancer. It seemed like somehow, this special little community we’d built was disappearing around us that night, for all the wrong reasons. Ironically, this was happening on a night when so many of those bands in that community were playing to probably the biggest audience they’d ever played to.

The thought of Daniel not being in the front row of Bad Things shows, closing his eyes, bobbing his head, holding his beer to his chest, looking content and totally wrapped up in our songs, that’s the ultimate compliment you can pay to a musician, just listening and appreciating what you do. And Daniel gave that to us every time, for years, pretty much from the beginning. He made us feel special and for that, we all had a special place in our hearts for the guy. Reading the posts on his Facebook page, I see he had that effect on a lot of people and definitely with a lot of other bands. A true fan of the music. Tried and true.

Tomorrow, we will get together at The Highline on Capitol HIll with an army of fellow musicians and friends and family to remember this gem of a man. Folks like Bakelite 78, Bucharest Drinking Team, Chaotic Noise Marching Corps, Mongrel Annie, Melissa Cerise, Diva Le Deviant and more will be providing entertainment. Sure to be a big night of music, tears, memories, smiles, more tears, more beers and drunken singalongs….something Daniel loved. It’ll be strange not to see him swaying arm and arm with the drunks during “Death of the Inferno” but, you know what? I’m betting he’ll be there all the same. He wouldn’t miss it.

Love you buddy and we’ll see you on the other side.

P.S. If you’re coming to the show tomorrow, bring cash. His family and loved ones were left with some stiff hospital bills and expenses that need to be taken care of. All proceeds of the door are going to the cause but bring extra so that Daniel’s loved ones can focus on their grieving.

Daniel Adam Driskill in all his glory! Friday, January 13, 2012 at The Comet Tavern. Photo by Jon Roy.

We had a great time last Saturday at the Columbia City Theater for a show supporting Northern California’s amazing El Radio Fantastique and our buddy, Baby Gramps. Hadn’t been on the Columbia City stage in quite a while and boy, it felt like home. Miss playing that place. Look for more shows there in the future.

Photographer Keith Johnson was in the house and he took some great pictures. Check ’em out. 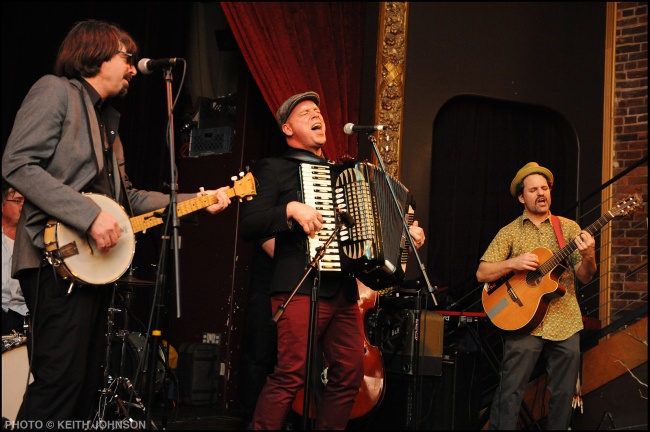 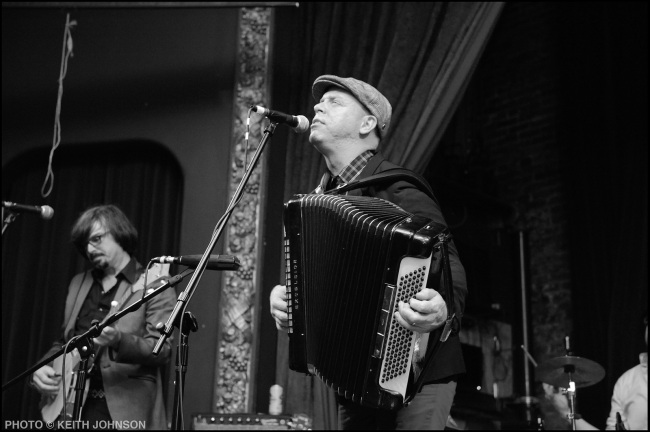 Thanks to everyone that came out to Conor Byrne’s last Thursday. We had a great time. Gold Hope Duo were great. Gramps was his usual amazing self and we did what we do to a happy, dancing Ballard audience.

Now that the first leg of our North to South Seattle Tour is complete, time to start preparing for our next couple appearances in town. First of all, we’ll be headlining an amazing bill at Lo-Fi Performance Gallery in Eastlake on Friday, March 28 with our old buddies The Dolomites. The Dolomites and The Bad Things go back into the Midnite Choir days, when we were just two of maybe four bands that were doing this kind of music in the Pacific Northwest. After travels to Japan, Europe and Mexico City, Stevhen Iancu, essentially the only consistent member of the band, is back to rock out on his accordion with us and Wenatchee’s Jipsea Party, who we have not seen yet but are confident will start things off in a most raucous way.

After that, we’ll be hitting Columbia City with Northern California’s amazing El Radio Fantastique on Saturday, April 5th. But, more on that later.

Get advanced tickets to the Lo-Fi show here and be sure to pick the Artist Ticket option as it benefits Cafe Racer Love and gets you a very cool collectible ticket, all for a mere $0.25 extra. 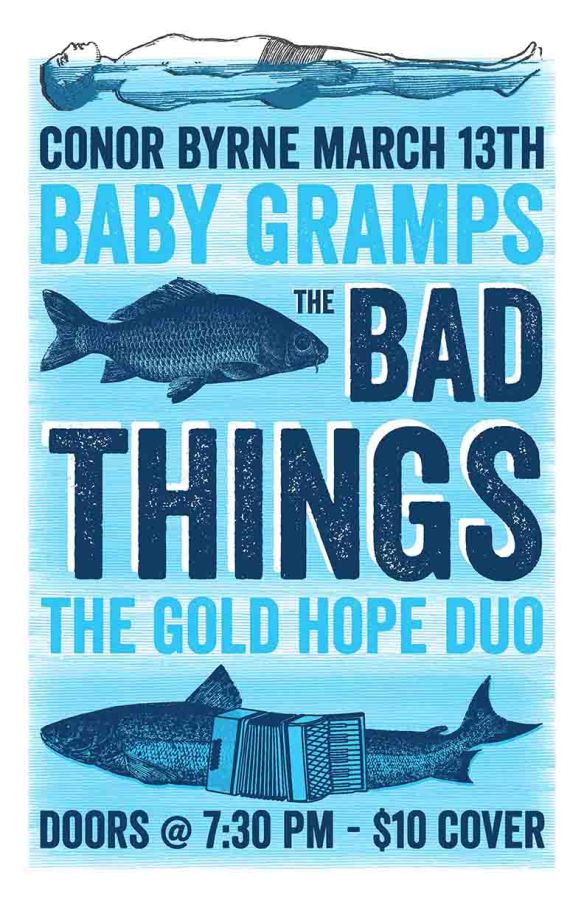 A great little lineup featuring our buddy, the legendary Baby Gramps, The Gold Hope Duo out of Kingston, New York, a high-octane folkabilly swing and The Bad Things closing out the night with our trademark arsenal of drinking songs and wounded waltzes. What else you gonna do on a Thursday night Ballard? Start the weekend early.

Show starts at 8:30 with Baby Gramps so get there early!

The Bad Things
The Gold Hope Duo
and Baby Gramps

Years ago, in the late 90s and early oughts, Jimmy the Pickpocket and Mad Wilcox were in a band called A Midnite Choir. Back then, long before bands like Gogol Bordello and Devotchka brought “gypsy punk” to the masses, there were only a small handful of bands in the Pacific Northwest that shared a love of accordions, banjos, drinking and songs about bad behavior. Here in Seattle, the Choir, Circus Contraption and bands like Black Cat Orchestra were representing. Down south in Portland, there was The Dolomites led by eccentric accordionist Stevhen Iancu.

Stevhen would sit on a toilet while playing accordion and would also deep fry food inside a garbage can on stage much to the delight, or sometimes disgust, of the front row. One memory that always sticks out is a bill we shared with them at Satyricon in Portland with Reverend Glasseye. Stevhen also enjoyed breathing fire and when the club cut The Dolomite’s sound and then refused to pay them, Stevhen poured lighter fluid on the bar and proceeded to light the bar on fire, resulting in 2 foot flames and a very surprised bartender, who promptly handed over the cash. Ah, the good ‘ol days!

END_OF_DOCUMENT_TOKEN_TO_BE_REPLACED 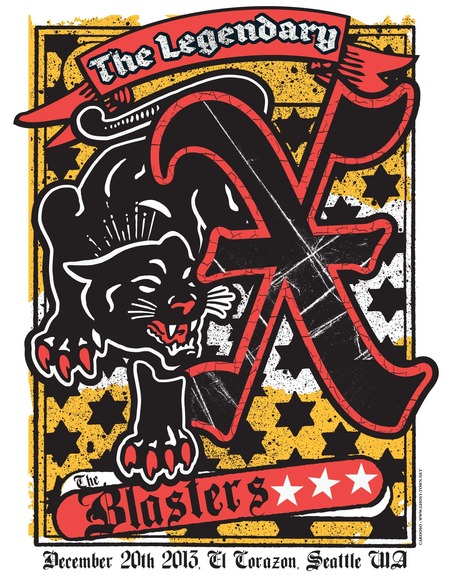 Just got word last night that we will be in fact sharing the stage with none other than the legendary X and the equally legendary Blasters on Friday, December 20th at El Corazon!!

These band’s mixture of roots music and punk rock were a major influence on us as a band and as music fans and this is such an amazing opportunity. Get tickets now’ cause this most definitely will sell out.

This Friday, we’ll be gracing Darrell’s Tavern in Shoreline with the “Power Quartet” version of the band. Joining us will be Bakelite 78 and The Debaucherauntes. Join us won’t you?

Also on Friday, we’ll be selling all our merch, physical CDs and downloads for 50% off. We’re just feeling that Black Friday spirit this year or something. Give your friend some Bad Things that don’t involve antibiotics.

END_OF_DOCUMENT_TOKEN_TO_BE_REPLACED

The Bad Things will be taking part in Q Nightclub’s “All Bands On Decks” guest DJ series tomorrow Wednesday, October 16 from 10pm to 12am, spinning the music that made us the strange and eclectic band that we are. There’s no cover and drink specials so come on down and share a drink with us, and maybe a spin on the dancefloor.

And then, this Saturday, October 19th we’ll be hitting Bellingham, Washington for a return of the killer lineup of The Bad Things, Danbert Nobacon and local burlesque beauties Dirty Bird Cabaret at The Green Frog Acoustic Tavern. This lineup killed it last spring so we thought a return engagement was in order.

We’ll see you at one of these fine events this week. Oh, and if you haven’t gotten your tickets for the 10th Annual Cabaret Macabre on Friday, November 1st, we highly suggest picking up a pair before they’re all gone! Look for a #CabMac post in the next week or so with full details on the show.