It’s that time of year once again. Cabaret Macabre is back for its 13th installment. Hard to believe. So for such a significant number we have to up the ante as far as the bill goes, right? No worries. We’ve found one of the best folk bands currently playing the west coast, will welcome the return of a Seattle legend for his 13th year and welcome our old friends from Portland via Russia. There will, as always, be dance performance scattered in with the bands and this year’s lineup features some of Seattle’s finest burlesque and bellydance performers. And though the great Diva Le Deviant is sitting this year out as MC, her replacement is more than capable of filling her shoes. But she will be missed.

Due to it being a Monday, we’ll be starting the show a little early. The show starts at 8pm with The Bad Things expected to hit the stage at 10pm. We’ll try to get you home by midnight. Promise. 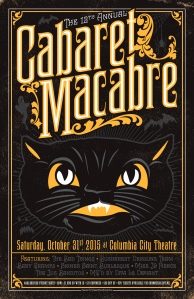 Ahhhh. The rain has returned. The leaves are dying all around. The clouds loom overhead. Must be our favorite time of year again. That’s right kiddies, Halloween is tomorrow and you know what that means! It’s time once again for our annual Halloween hoedown Cabaret Macabre.

Seems like every year the excitement is upped a bit and this year is no exception. Tickets sales are surpassing all year’s past, we’re getting mentions in the Seattle PI and The Sunbreak. Halloweeners from the south end and beyond are strengthening their livers and compiling gruesome costumery as we speak.

It’s a great lineup this year with many newcomers performing for the first time. Breaking their macabre cherry as it were. Super excited to have the Balkan powerhouse that is Bucharest Drinking Team, who will take the stage at 10pm. Sinner Saint Burlesque will tantalize audiences with their sultry shenanigans between bands and we’re excited for the ragtime sounds of the Jug Banditos, who will be opening the night at 8:30pm. Not only that, our dear friends The Mongrel Jews will be performing a set on the sidewalk and in the Bourbon Bar before doors even open. That’s right! Get there around 7:30pm and catch them. They’ll also be joining The Bad Things on stage as part of The Bad Things’ 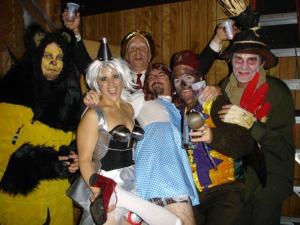 Bad Things circa 2007 at the 4th Annual Cabaret Macabre at Jules Maes Saloon in Georgetown.

Cut-throat Cabaret Choir, which will also include members of Bakelite 78, The Debaucherauntes and Bat Country (RIP).

Baby Gramps will be back for his twelfth year and is bringing accordionist Stevhen Koji Baianu with him. Bad Things fans may know him for his work with his project The Dolomites, as well as stints with Gogol Bordello and Balkan Beat Box, to name a few. Sounds like Gramps is bringing a whole crew of freaks up from Portland, so be sure to catch his set at 9:15pm.

And then, at 11pm, The Bad Things will hit the stage for a long set of our more macabre numbers. We’ll be sadly missing Stanislav the Gypsy this year but I imagine you’ll be able to spot him around the neighborhood. Special guests will appear throughout the night, as well as our Choir, which I mentioned earlier.

Also, let’s not forget the “bitch in charge,” your host for the last several Cabaret Macabre instalments. She always gets the drunken audience all riled up for us and it wouldn’t be the same with out her. Buy her a drink when you see her. Ladies and gentlemen, Diva Le Deviant!

We’ll also be selling a limited-edition commemorative t-shirt at the show and over half have been claimed already, so get to the merch table and pick up one before your size is gone. They’re $20 or $23 for a t-shirt/poster combo (while supplies last). Cash only please.

As I said earlier, excitement has been a little more intense this year and ticket sales are already surpassing the last couple years. I think there will be tickets at the door but can’t guarantee it, so pick yours up here before they’re all gone. Today is traditionally our biggest day of ticket sales. 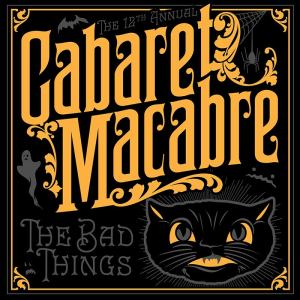 That’s right friends. We’re offering this amazing, limited edition t-shirt designed by Robert ‘Nix’ Nixon and a show poster with your purchase of a Cabaret Macabre ticket. For just $40, you get into the best show of the year, get an extremely limited edition t-shirt (less than 30 will be made) and the amazing poster to remember this night by. What more can you ask for.

Just specify your shirt size when prompted during the ticket purchase process and we’ll have it waiting for you at our merch table the night of the show. Better get them quick ’cause they won’t last long.

You can get tickets here: http://cabmac2015.bpt.me

This year’s lineup is set to be a humdinger, with Baby Gramps returning for his annual appearance, Balkan misfits Bucharest Drinking Team bringing their bombastic take on Eastern European party music, the gin-soaked rag-blues of The Jug Banditos and interspersed throughout the evening, burlesque and dance performance from Sinner Saint Burlesque and Miss J9 Fierce, co-producer of Cabaret Macabre. Diva Le Deviant returns as our host and closing out the night, will be your own Bad Things.

Tickets go on sale on Tuesday, September 1st at 10am at Brown Paper Tickets, unless of course you were lucky enough to attend in the past or are on The Bad Things mailing list. If that’s you, check your inbox for a special fan club pre-sale. The rest of you hang tight and get them tickets quick before they’re gone on September 1st!

An appropriate send-off for a well-needed rest. We announced on Facebook and at the show but we will be going on hiatus for an indefinite period of time while we recharge, relax and focus on other things. We have no doubt we’ll be back, just not sure when at the moment. May be six months, may be longer.

We’ll still update the site as we got tons of live tracks, unreleased tracks, videos, anecdotes and lord knows what else that we can share. Stay tuned for the next show! Bad Things out.

P.S. Here are some fan photos from our set at Cabaret Macabre. Enjoy! 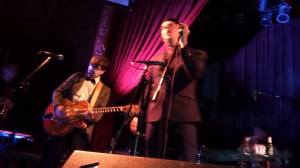 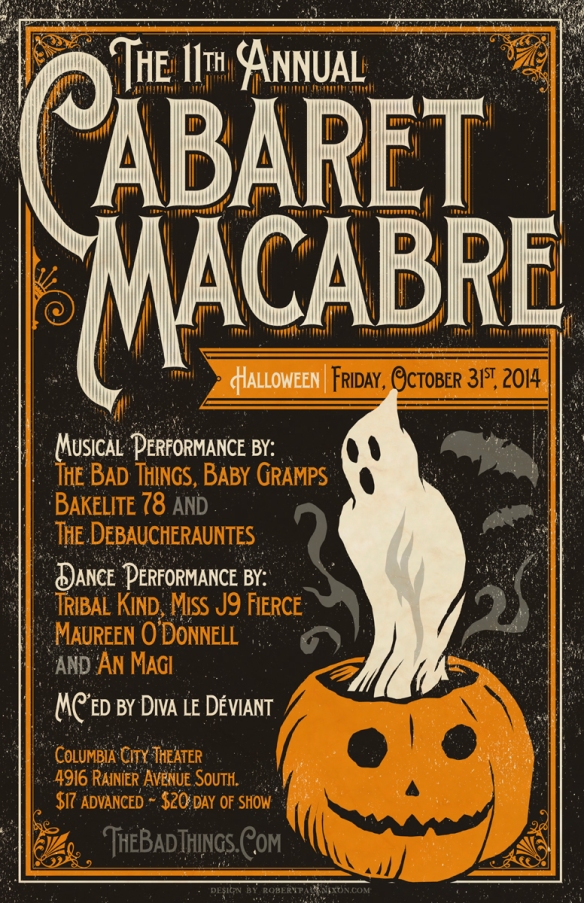 END_OF_DOCUMENT_TOKEN_TO_BE_REPLACED

The Bad Things will be taking part in Q Nightclub’s “All Bands On Decks” guest DJ series tomorrow Wednesday, October 16 from 10pm to 12am, spinning the music that made us the strange and eclectic band that we are. There’s no cover and drink specials so come on down and share a drink with us, and maybe a spin on the dancefloor.

And then, this Saturday, October 19th we’ll be hitting Bellingham, Washington for a return of the killer lineup of The Bad Things, Danbert Nobacon and local burlesque beauties Dirty Bird Cabaret at The Green Frog Acoustic Tavern. This lineup killed it last spring so we thought a return engagement was in order.

We’ll see you at one of these fine events this week. Oh, and if you haven’t gotten your tickets for the 10th Annual Cabaret Macabre on Friday, November 1st, we highly suggest picking up a pair before they’re all gone! Look for a #CabMac post in the next week or so with full details on the show.

In 2004, The Bad Things hosted the first Cabaret Macabre in a warehouse space called Jem Studios in Georgetown, now home to The Mix and other businesses. Held on Halloween, it was a night of strange costumery, drunken debauchery, sideshow splendor and junkyard sounds. The lineup included performances by Seattle Semi-Pro Wrestling, some stomach-churning suspension piercing by PURE, music from Reverend Glasseye, Dark Carny, Baby Gramps and, of course, The Bad Things, who were pulling double duty as bartenders, door staff, stage techs and security!

Here we are ten years later and most of those organizations are now defunct. Georgetown is quickly turning into a hipster mecca and the local cabaret scene has grown into a nationally recognized phenomenon. Luckily, two veterans from that faraway night are still with us, the legendary Baby Gramps and, of course, The Bad Things.

Over the past decade, The Bad Things have since hosted Cabaret Macabre in a variety of venues and neighborhoods and have featured acts from around the world. This year, in an effort to re-capture the underground party vibe of the first Cabaret Macabre, the Bad Things are taking over Capitol Hill’s FRED Wildlife Refuge for one night of dance, aerial performance, burlesque and music.

We’re also super excited to welcome back to Seattle: Miss Michele Frances! Michele has performed aerial at countless Bad Things events over the past decade. She moved to Austin about a year ago but is back for one night only to perform with us. We couldn’t be happier.

Dia De Los Muertos-themed pageantry is highly encouraged! We’ll be announcing more details on the party as they emerge but we can guarantee an immersive evening surrounded by Seattle’s favorite macabre miscreants that you won’t soon forget.

We are also making the Artist Tickets available for purchase for this event. By donating $0.25 extra on your ticket price, you will get a special limited edition ticket adorned with original artwork by Jim Woodring or Ellen Forney. All proceeds will go towards the Cafe Racer Love fund. Please choose this option when purchasing your tickets.