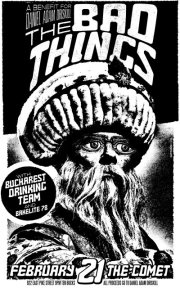 One of the coolest thing about being in a band is meeting folks that are profoundly moved by your music. As a die-hard music fan, I know how the music that you love becomes the soundtrack to your life. So many of my memories are directly associated with songs. Whenever I hear those songs, it takes me right back to the emotional landscape of that moment more than any picture or video can.

Music can be life changing. Punk rock was the catalyst for me to reject the mainstream culture of my small town high school back in the mid-80s, despite knowing that doing so would pretty much guarantee that I would lose most of my friends, face retribution from metal heads and rednecks, bring my sexual orientation into question and instill distrust from authority figures who previously saw me as a “good” kid. But, I didn’t care! I knew that this was the greatest thing I’d ever discovered and I related to the anger and alienation that it represented. It was a way to say “I’m not like you” in a very public way and it shaped who I would be for the rest of my life.

When you realize that the music that you write and perform has become someone’s life soundtrack or affected their life in a profound way, it’s beyond an honor. Over the last ten years, we’ve had folks tell us that they got married to our music or met their current partner at one of our shows, that a certain song always takes them back to certain period of their life, that a song will always remind them of a lost friend, that their kid loves our music, that we inspired them to start a band or that their life was changed at one of our shows – sometimes for the better, sometimes for the worse. It’s for these people that we keep The Bad Things alive despite lives that get increasingly busy with the addition of kids, jobs, homes, marriages, etc. If we know our music is making an impact in at least one person’s life, then we’re obviously doing something right.

One of those people impacted by our music has been with us since, almost, the beginning. He even went so far as to get our accordion logo tattooed on his arm! As far as we know, this is the only Bad Things tattoo in existence. This man is up front at probably 80% of our Seattle shows, always down to share a drink or smoke, always so stoked to see us and we can see in his eyes how much he appreciates our music.

So, when that person comes down with a serious illness, we rally and do what we can to help. If there is one thing that we learned from last year, it’s that the community that musicians and music fans build is a powerful tool that can help people weather through the hardest of times. Music is healing, music is life and music can be a tool to change people’s lives for the better. Maybe that’s a tad idealistic but goddamit, I saw it in action last year in the wake of nightmarish tragedy and now, I’m a believer!

The man we’re helping is Daniel Adam Driskill. I will respect his privacy and not mention his illness but, trust me, it’s serious and he needs our help. We’re aware that the money earned at this show will just be a drop in an ocean of medical bills, but it’s a small way for us to say thank you for keeping us going, for listening, for giving a shit about a band of drunken miscreants. We couldn’t do it without you D.A.D. and we hope soon you’ll be rocking out at one of our shows years from now with a clean bill of health. You can find out more about the show here and if you’re in Seattle, you better get your ass to The Comet tomorrow night for an incredible night of music and love.