One of the coolest thing about being in a band is meeting folks that are profoundly moved by your music. As a die-hard music fan, I know how the music that you love becomes the soundtrack to your life. So many of my memories are directly associated with songs. Whenever I hear those songs, it takes me right back to the emotional landscape of that moment more than any picture or video can.

Music can be life changing. Punk rock was the catalyst for me to reject the mainstream culture of my small town high school back in the mid-80s, despite knowing that doing so would pretty much guarantee that I would lose most of my friends, face retribution from metal heads and rednecks, bring my sexual orientation into question and instill distrust from authority figures who previously saw me as a “good” kid. But, I didn’t care! I knew that this was the greatest thing I’d ever discovered and I related to the anger and alienation that it represented. It was a way to say “I’m not like you” in a very public way and it shaped who I would be for the rest of my life.

When you realize that the music that you write and perform has become someone’s life soundtrack or affected their life in a profound way, it’s beyond an honor. Over the last ten years, we’ve had folks tell us that they got married to our music or met their current partner at one of our shows, that a certain song always takes them back to certain period of their life, that a song will always remind them of a lost friend, that their kid loves our music, that we inspired them to start a band or that their life was changed at one of our shows – sometimes for the better, sometimes for the worse. It’s for these people that we keep The Bad Things alive despite lives that get increasingly busy with the addition of kids, jobs, homes, marriages, etc. If we know our music is making an impact in at least one person’s life, then we’re obviously doing something right. END_OF_DOCUMENT_TOKEN_TO_BE_REPLACED 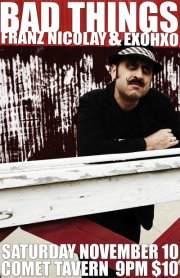 Tonight, The Bad Things will be headlining our favorite dive bar on Capitol Hill with the great Franz Nicolay, formerly of the Hold Steady and World/Inferno Friendship Society. Also on the bill will be some sweet orchestral pop courtesy of Seattle’s Exohxo. This is a show not to be missed and we can’t wait to see all your smiling, drunken faces! Bad Things go on around midnight….as it should be!

Franz is on tour for his new album “Do The Struggle.” Here’s a little sneak peak of what’s in store for you all this evening.

Thanks to Jon Roy for some great shots of our Comet show on Friday the 13th. A drunken good time was had by all!

END_OF_DOCUMENT_TOKEN_TO_BE_REPLACED

Yes, that’s right. We’ll be gracing The Comet Tavern on Friday, January 13th with an unbelievable lineup: The Bad Things, Bakelite 78, Bat Country and Gunstreet Glory. All good friends and all great drinking music. Prepare your livers because this one is going to hurt. All the pertinent details can be found here. This is the only show that we currently have booked this winter. Hoping to get down to Portland sometime soon and get into the studio in early Spring. And, finally, in preparation for the upcoming holiday, enjoy this Thanksgiving message from the one and only William S. Burroughs: END_OF_DOCUMENT_TOKEN_TO_BE_REPLACED