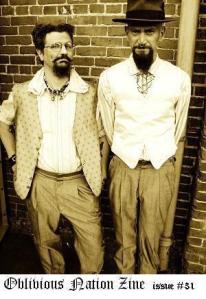 Tragedy struck our Seattle music scene a week ago. We’ve been decidedly silent on the website so I wanted to include a little tribute to two good friends of The Bad Things that were taken from us in an act of senseless violence. I’m sure most of you know what we’re talking about but if you don’t, you can read about it here and read about the friends we lost here…along with the other victims of this horrific crime. As you can see by our previous post, we had just played a show with them, so this really hit home hard.

Also, tomorrow, we will be playing a tribute show to them and the other victims alongside their former band mates and musical compatriots and performers that they’d worked with. More on that here. We will also be partaking in another tribute/fundraiser at The Tractor Tavern on Tuesday, July 19th so stay tuned for more information on that. And there’s a widget on our homepage that will take you to the site where you can donate money and find out about all the fundraising events going on in Seattle for the families of those lost and for the one survivor of this horrible event.

Here’s a beautiful song recorded at Drew aka Shmootzi’s birthday party at Cafe Racer last year. Listen and cry and drink and repeat. Also, check out Jimmy the Pickpocket’s tributes to our uber-talented, fallen friends after the jump. 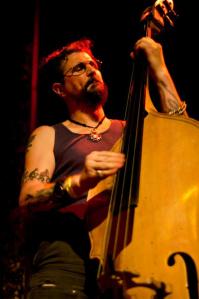 The first time I met Joseph Vito Albanese was at the old Rendezvous/Jewelbox Theater, when it was a truly sketchy dive bar. It was probably ’97 or ’98. My band at the time, Midnite Choir played our first gig opening for The Circus Contraption Band in what was most likely one of their first shows. I remember thinking Joe was one of the most unique bass player’s I’d ever heard….I remember his electric bass with plastic baby heads all over it and those boots he always wore. He seemed so cool and intimidating to me but when I met him, he was the sweetest most down to earth guy. It made me realize that this new scene I was entering was filled with such friendly, accepting and jaw-droppingly talented people. I didn’t feel worthy and I always had such huge respect for Joe as a person and as a musician. When I saw him backstage on Saturday at The Funhouse Seattle, he was that same guy. Always great to talk to, always passionate about music and always humble and down-to-earth. I’m gonna miss being a music nerd with him backstage at shows, I’m gonna miss hearing that one-of-a-kind bass sound he had and I’m gonna miss his sweet smile. Feels good to think about those times though. That truly was the start of this amazing community that we have today and Joe was there from Day 1. He was one of us and it feels like a limb’s been removed from our scene. I was supposed to play with him in a few weeks again. I was going to see Gods Favorite Beefcake next weekend. I can’t believe he’s gone. Love you brother. Hope you and Drew are making a ruckus wherever you both are. Maybe we’ll hang out in the Green Room in heaven or hell or wherever freaks like us go when we die. Hope the PBR is cold. 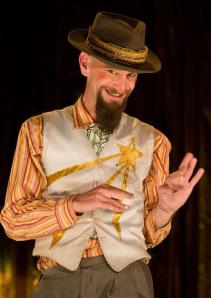 I really wanted to hate Drew aka Shmootzi TheClod when I first met him. My band Midnite Choir has fallen apart in 2003 because our singer and chief songwriter Greg Adair was moving on artistically and wanted to focus more fully on The Circus Contraption Band who were starting to get some traction regionally and nationally. Me and Mad Wilcox our bass player were bummed but started The Bad Things in the wake of that breakup. Shortly after that I started hearing rumors of this new guy that had joined the Circus Contraption Band. I heard that Greg was starting a band with him and Joe and they were called The Moonpenny Opera. I was so jealous that someone else was going to get to share Greg’s talents and play his songs and this new guy really felt like the “other woman” to me. When I finally saw Moonpenny Opera, I was totally blown away. It all made sense, he and Greg and Joe just fit together in a way that Midnite Choir hadn’t. Drew’s songs and stage presence were amazing. I still wanted to hate him but once I met him, I felt like an asshole. He was weird, funny, friendly, strangely sweet and instantly loveable. All my jealousy vanished and Drew quickly became the guy I wanted to hang out with whenever we played shows together. He’d always seem so happy to see me and would always heap compliments on The Bad Things, which felt amazing since I looked up to him so much as a songwriter and performer. Being a busy guy, a father and a South ender, I never made it to Cafe Racer but my friends hung out there and I vicariously saw this incredible scene that was developing there. Of course, Gods Favorite Beefcake were at the heart of it and it was my mission to get out there and play a show with my boys. I told Drew that when I saw him on Saturday at The Funhouse Seattle. He hugged me and enthusiastically told me how great that would be. All that night, all any of us in the audience could talk about was how tight the band was, how great Drew’s new songs were, how he was such a unique and genuine performer and how genuinely humble he was about his talents. When I told him how much I loved his sad songs, he said, “Wish I didn’t have to write them, but I got to get ’em out of my head.” I want to hear those songs now and I’ve been listening to God’s Favorite Beefcake nonstop since the shootings. It’s a crime his talents weren’t recognized by the larger Seattle music community but for those of us that were in the know, he was our gem and the face of the scene. Now he’s gone but the songs live on. I’m gonna miss him so much but at least he and Joe are together, so I know they’re starting their next project somewhere out there. Can’t wait to hear those songs when I meet them on the other side.