That’s right, we’re back at Folklife! We go on at 9pm on the Vera Stage this Saturday, May 26th and then we pop on over to The Funhouse to headline Night Number 2 of the Punk As Folk Weekend!  The great God’s Favorite Beefcake and Professor Gall will be opening, along with the Red Stitch Circus Phenomenon all the way from New Orleans. Scroll down for the press release and the lineup for the rest of the weekend. Should be folk-ing amazing! 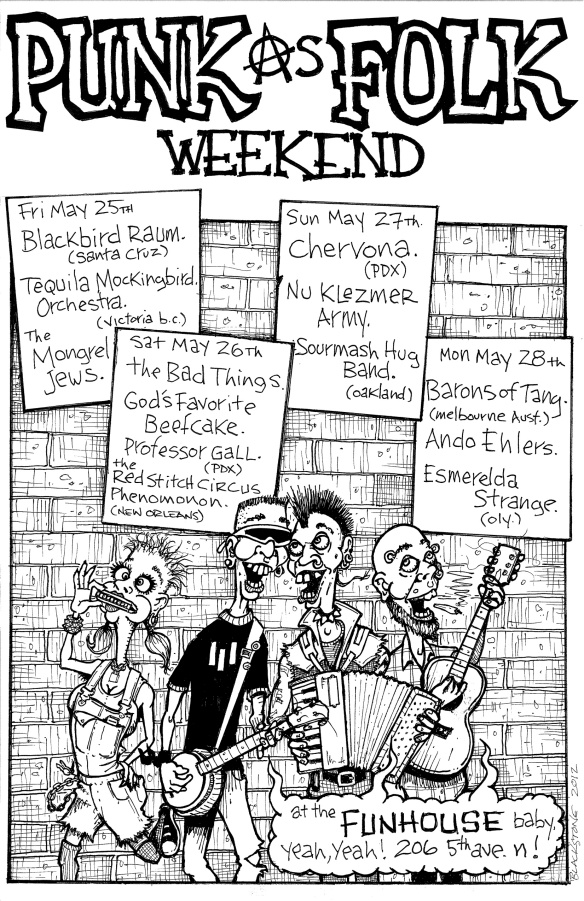 Seattle – This Memorial Day Weekend, legendary Seattle punk club The Funhouse will host four days of the finest folk punk from across the globe. The weekend’s headliners include Santa Cruz’s Blackbird Raum, Seattle’s The Bad Things, Chervona from Portland and Barons of Tang all the way from Melbourne, Australia. Also, performing are The Tequila Mockingbird Orchestra (Vancouver B.C.), The Mongrel Jews (Seattle), God’s Favorite Beefcake (Seattle), Professer Gall (Portland), Sourmash Hug Band (Oakland), Nu Klezmer Army (Seattle), Ando Ehlers (Seattle), Esmerelda Strange (Olympia) and circus performers The Red Stitch Circus Phenomenon (New Orleans). Each of the headliners will also be performing earlier in the day across the street as part of the 41st Annual Northwest Folklife Festival. These shows give each band’s fans an opportunity to catch a longer set in an alcohol-friendly environment.

“Last year, I noticed more of a punk presence than I’ve ever seen in the past,” says Punk As Folk organizer Jimmy the Pickpocket. “It’s slowly been growing but I think it’s high time we highlight all these great bands and give their fans a chance to see a full set outside of the festival grounds…away from the hippies!”

While this was intended as a “first annual” event, the recent news of the relocation of The Funhouse, may have put a damper on those plans. Pickpocket says, “Not only is the Funhouse the perfect venue for this event, it’s right across the freakin’ street from the festival! With it moving, we’ll have to rethink our approach for next year. Stay tuned!”

Cover for each night is a recession and punk-friendly price of $6, except for Saturday night’s Bad Things show, which will feature acrobatic-circus entertainment courtesy of the Red Stitch Circus Phenomenon from New Orleans between bands and will cost $8.

This will be THE event for Folklifers that prefer a gritty attitude with their folk music. It will also be an opportunity to create memories in a legendary punk venue that will soon no longer be with us. Three words: Punk As Folk!

Blackbird Raum – Blackbird Raum formed out of the nucleus of a squatter community living in abandoned buildings and greenbelt treehouses in Santa Cruz, California, in the early 2000’s. Finding themselves living without electricity, they began to learn to play folk instruments from each other and other members of the traveling punk/folk culture. They all grew up playing in anarcho-punk, indie and ska bands and then, knowing next to nothing about traditional music, slowly gathered together the skills to create a new genre of music, based somewhere right in the middle of punk and folk.
Website: http://www.blackpowderrecords.com/raum

The Bad Things – For the last ten years The Bad Things have defended the title of Seattle’s premier “Junkyard Cabaret” band. With drunken swagger, the band plays a mixture of European folk music, classic Americana and kitchen-sink pop, all served up with a hefty dose of gallows humor and punk cabaret. They have built a ridiculously devoted cult following through their rambunctious reputation and recently released a collaboration with Danbert Nobacon, co-founder of UK anarcho-pop legends Chumbawamba. The band is preparing to enter the studio in the Fall of 2012 to record their highly anticipated fourth release. Consider yourself warned!
Website: http://www.thebadthings.com

Chervona – Mixing the passion of the best Gypsy, Russian, Ukrainian, klezmer and Balkan musical traditions, Portland’s Chervona bring the fire of Eastern European carnivals to the land of America. With their authenticity and genuine spark, Chervona have stolen many hearts across the country. Their brass section, accordion and Russian language captures the soul of the old world while still mixing in modern infulences. Chervona transforms a celebration into the ultimate party!
Website: http://www.starbugs.com/chervona/index.php

The Barons of Tang – Initially rehearsing in a well-known Melbourne squat, The Barons cut their teeth with performances for local underground theatre and circus troupes. With a taste for travel and chaos, the Barons of Tang embarked on 2 years of merciless touring, leaving a trail of battered and bruised dance floors in their wake. Lashing Tango, Rockabilly, Metal and Gypsy feels together with hard hitting guitar riffs, double kick blast beats and massive horn arrangements, The Barons of Tang serve up their self described ‘Gypsy Death-core’. The catchy tunes and punk ethos all tie together to mean one thing, dancing is inevitable!
Website: http://www.thebaronsoftang.com