Well, it’s been a while hasn’t it friends?  The Bad Things have been busy little beavers during this last spring and summer.  Playing some low-key gigs with our new member, writing a ton of new material, and gearing up for the release of our new CD with Danbert Nobacon coming out on October 19th on Verbal Burlesque records.  The cover art is above and was done by Danbert.  Here’s a little blurb about it from the press release:

Woebegone is a fictional musical noir tracking the early years of Johnny Woebegone and Lilithiana Red, through songs of oil, sex,
death with an otherworldliness we cannot quite put our finger on. Set in the rapidly decaying world of the mid-2020s, with Nobacon in character as Woebegone, the album charts yet to be discovered hidden depths. The pairing Nobaconian lounge noir and other country blues, with the majesty of The Bad Things’ junkyard cabaret provides a musical feast for delinquents and degenerates everywhere.

We’ve posted one of the tracks “Evolution 9” on our Bandcamp page and you all can listen to it here. Love the lyrics on this track!

Danbert also has a book coming out October 1st called “Three Dead Princes – An Anarchist Fairytale.” It features illustrations by legendary punk rock filmaker Alex Cox, best known for the cult films Repo Man, Straight to Hell, and Sid and Nancy. Danbert will be criss-crossing the country doing readings for the book but will stop back by Seattle to play the 7th Annual Cabaret Macabre which will double as the CD Release party for “Woebegone.”  So all you Seattle folks can pick up a copy then.

Speaking of Cabaret Macabre, it’s going to be a great one this year.  After two years out of the south end, we’re bringing it back.  While we would have loved to have it in Georgetown, there simply isn’t a single venue there that’s big enough to handle it now that Jules Maes stopped doing live shows, so we’re bringing it to the Columbia City Theatre.  The Theatre has new owners who have been doing a great job and we’re super excited to be working with them this year.  We also have some co-producers in the Skinny Dip gals who will be presenting a rotating cast of beautiful, dancing girls in the Bourbon Bar as part of the Sideshow Cabaret.  The mainstage will feature us, Baby Gramps, Danbert Nobacon, and Ronald McFondle. We’ll be posting a ticket link soon on our “shows” page so look out for that.  As always, bizarre costumes are encouraged as is drunken revelry!

Speaking of drunks, our illustrious guitarist/mandolinist Stanislav the Gypsy has bought himself a bar in Columbia City, Lottie’s 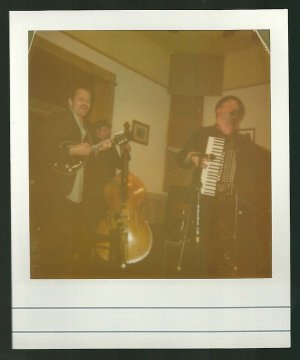 Lounge.  Not only that, but you’ll also see Captain Panto, banjo/dobro extraordinaire slangin’ drinks behind the bar.  After years of being regulars at Lottie’s, The Bad Things have taken over.  So, Seattle folks, get your asses on the light rail and grab a drink at Lottie’s.  No Bad Things-themed drinks are on the menu yet but I know I would love to quaff a “Drunken Doughboy” someday.

I’m the king of segue ways today!  Our buddy Hamish Chappell has been hard at work on a video for “Drunken Doughboy” which should be finished sometime in the fall.  I imagine we might have a viewing of it at Cabaret Macabre.  Part of it was shot in Lottie’s and features some finely-dressed Bad Things fans shaking their stuff.  Excited to see that.  We also provided the soundtrack to the short film “A Face For All Occasions” which should be making the rounds at film festivals soon.  For now, check out the website.

We got a handful of shows around the Pacific Northwest so check out our “Shows” page for more details.  We’ll also probably be updating our website in the near future  as well so look out for that.  We will have a link to purchase “Woebegone” on our “Merchandise” page so those of you outside of Seattle will be able to purchase it after October 19th at www.thebadthings.com.

I’ve scattered some great polaroids taken of our last trip to Twisp to visit Danbert and play at the Twisp River Pub.  Our buddy Jase took ’em on expired film!

That’s it for now kiddies!  Talk to you soon.